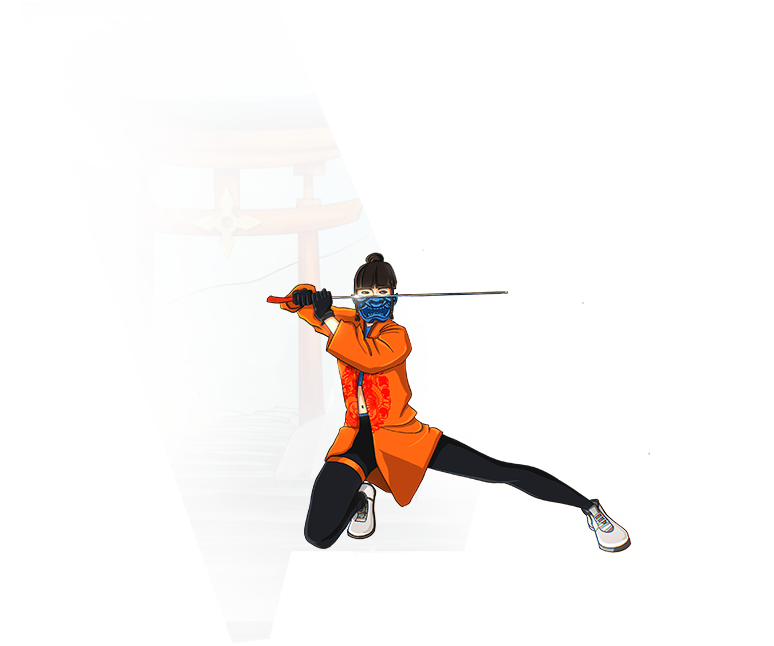 This project is for everyone who can relate to the storyline and insights behind it.
Shuriken Chiks is a chaotic, bold manifest about necessity of self-expression in the noisy modern world.
To fully comprehend why we are doing this, please check the letter from us.

Then, if you feel we have some things in common, welcome to the Shuriken community.
In case you don’t like us, just skip it and have a nice day anyway! High five! 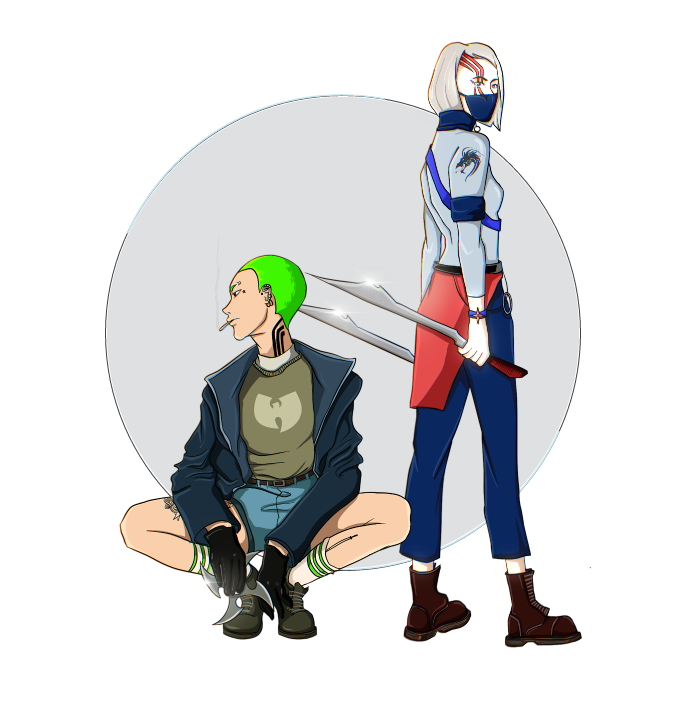 At first, Rebellious minds were just awakened.
When mankind entered the ultra-modern era,
room for armed conflicts to obtain the territories, power and wealth was supposed to be shut.
As it seemed, progress would have brought serenity.
When the world had lived in fictitious peace, the new conqueror arrived.

The noise.
It was hard to notice, as the noise did not arrive with weapons.
It was even more challenging to notice, as the noise, ironically, was brought by humans themselves.
They became mentally overloaded.
As the bubble strengthened over time, it became almost impossible to break it.
The bully was harsh.
The noise victoriously dictated the norms.

And that slowly turned them into the warriors.
The rebellion has begun.

When you see them, you see loud expression of polarizing and rebellious identity. Shuriken Chiks is the Ethereum blockchain-based NFT collection made up by 10,000 unique pieces. All of them are bold, savageous and stylish, but some are rarer than others. There are thousands of them with hundreds of different attributes. Each chik belongs to the one shuriken category from this list:
We have four shuriken categories:

You’ll also come across different kind of swords, cover-ups, outfits and bunch of things with different rarity proportions. For more details about the character looks, stay tuned. Before that, check the letter from us to understand reasoning behind this project if you have not done it yet. 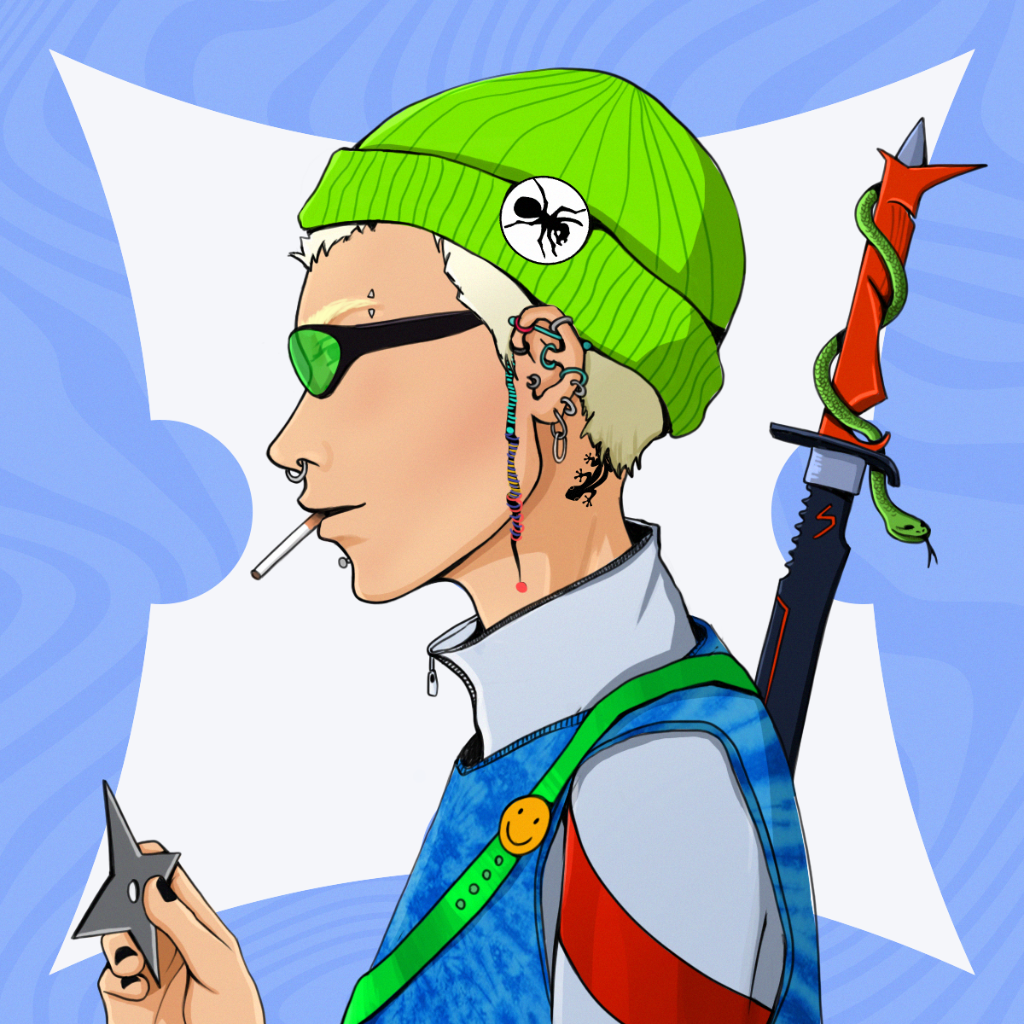 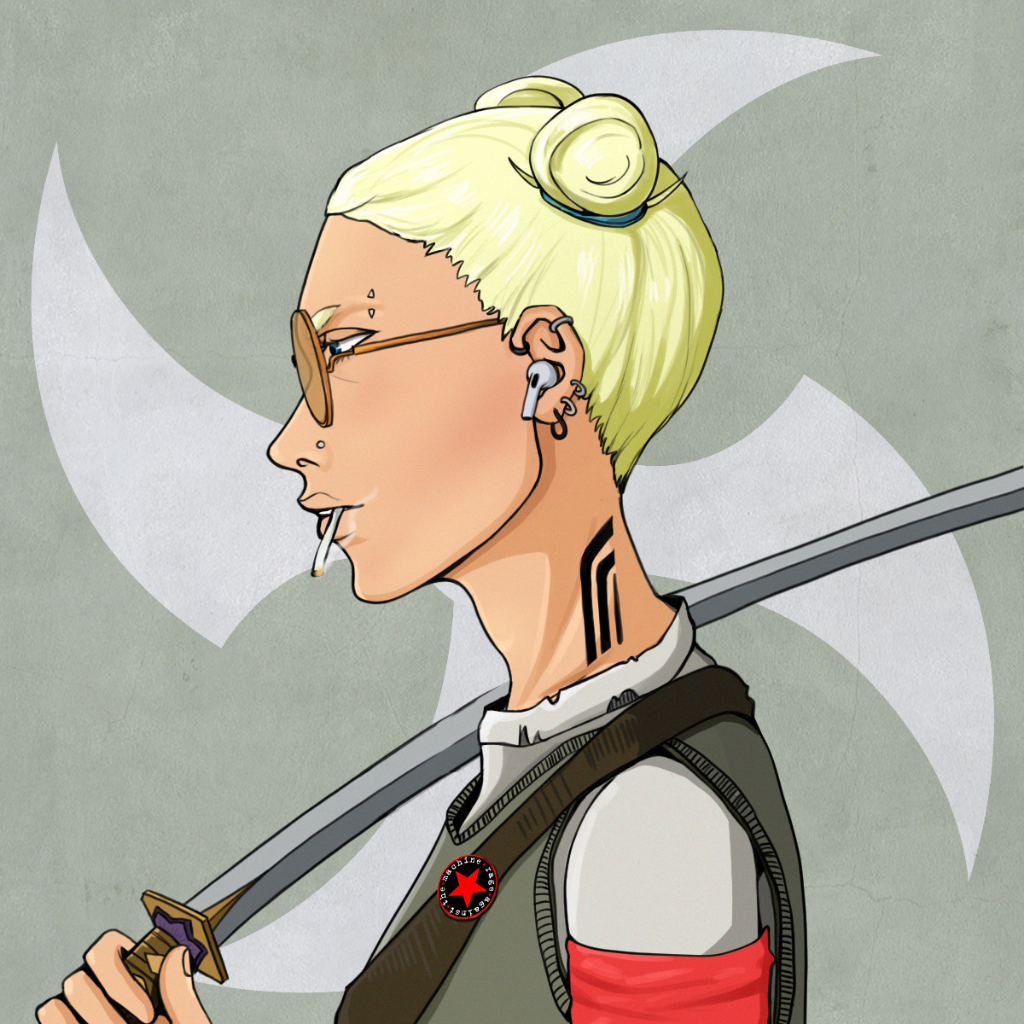 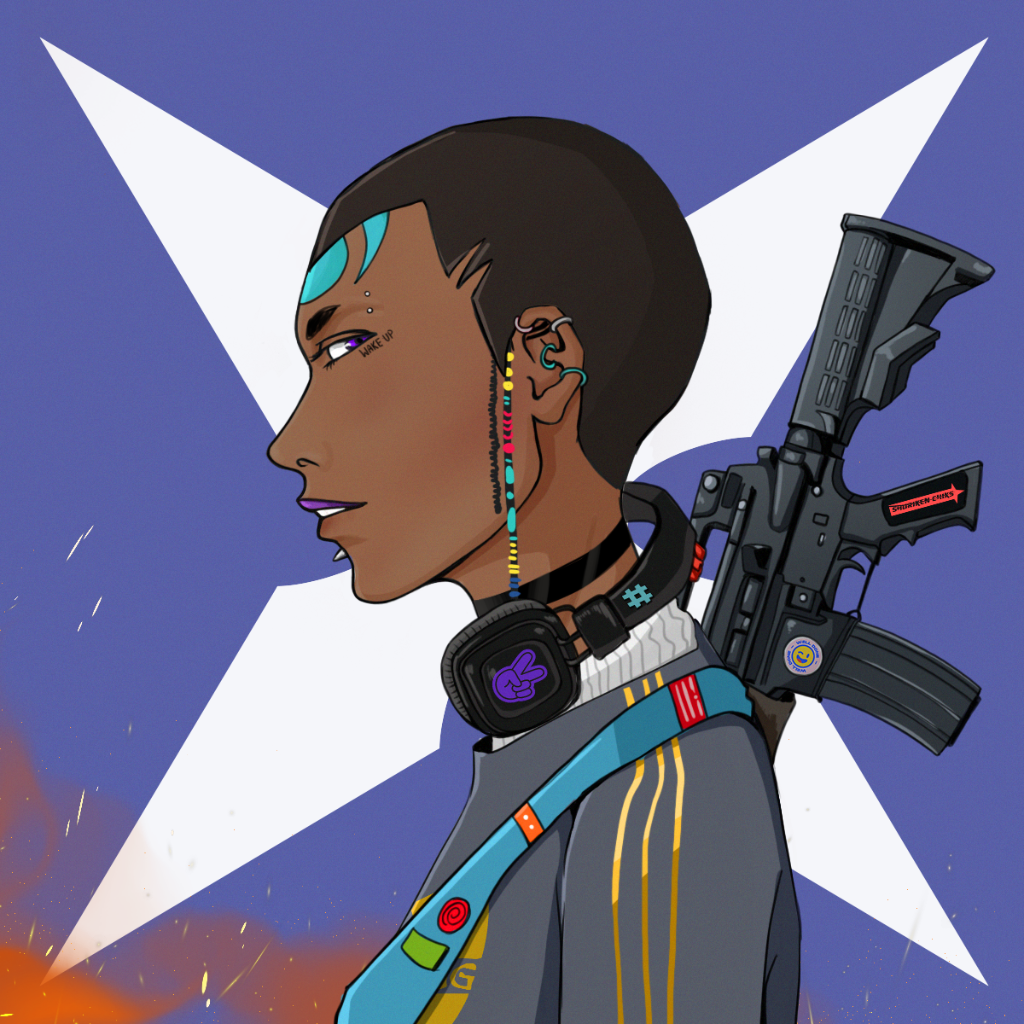 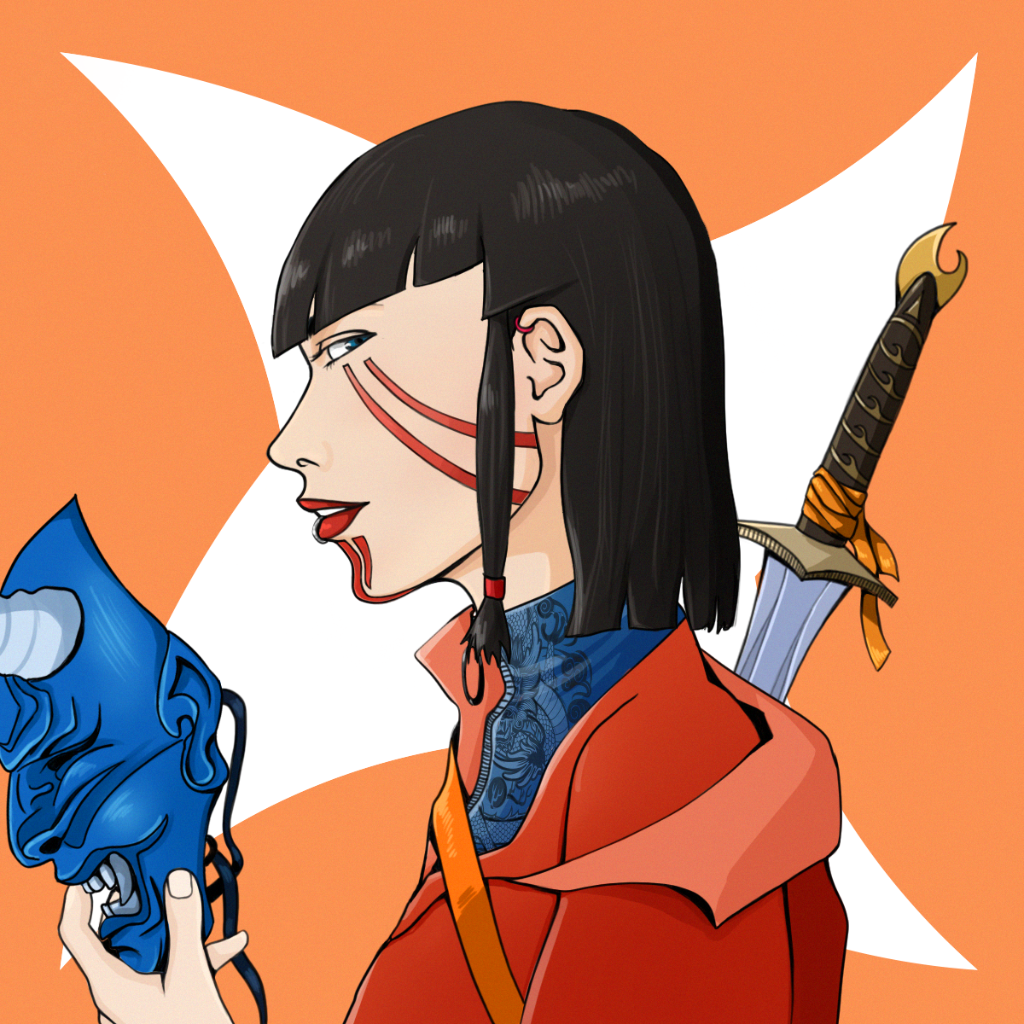 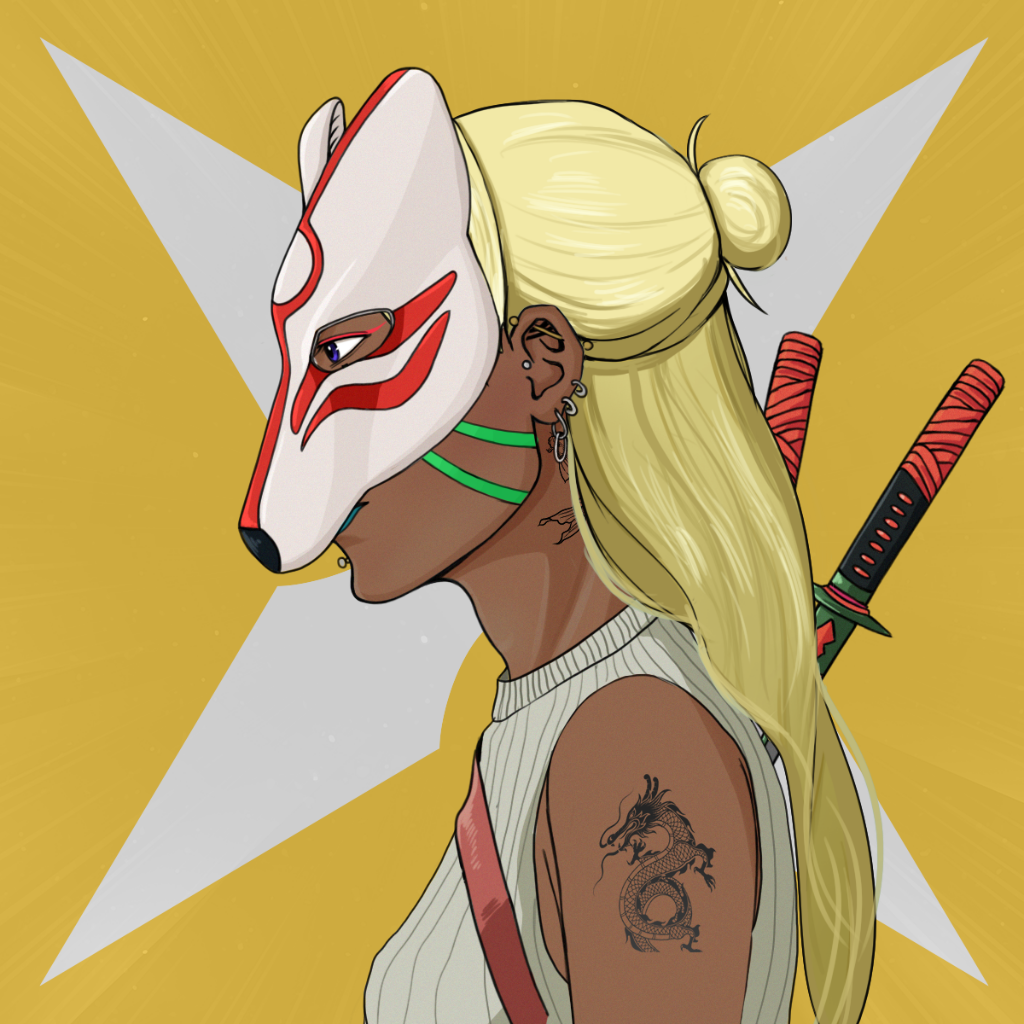 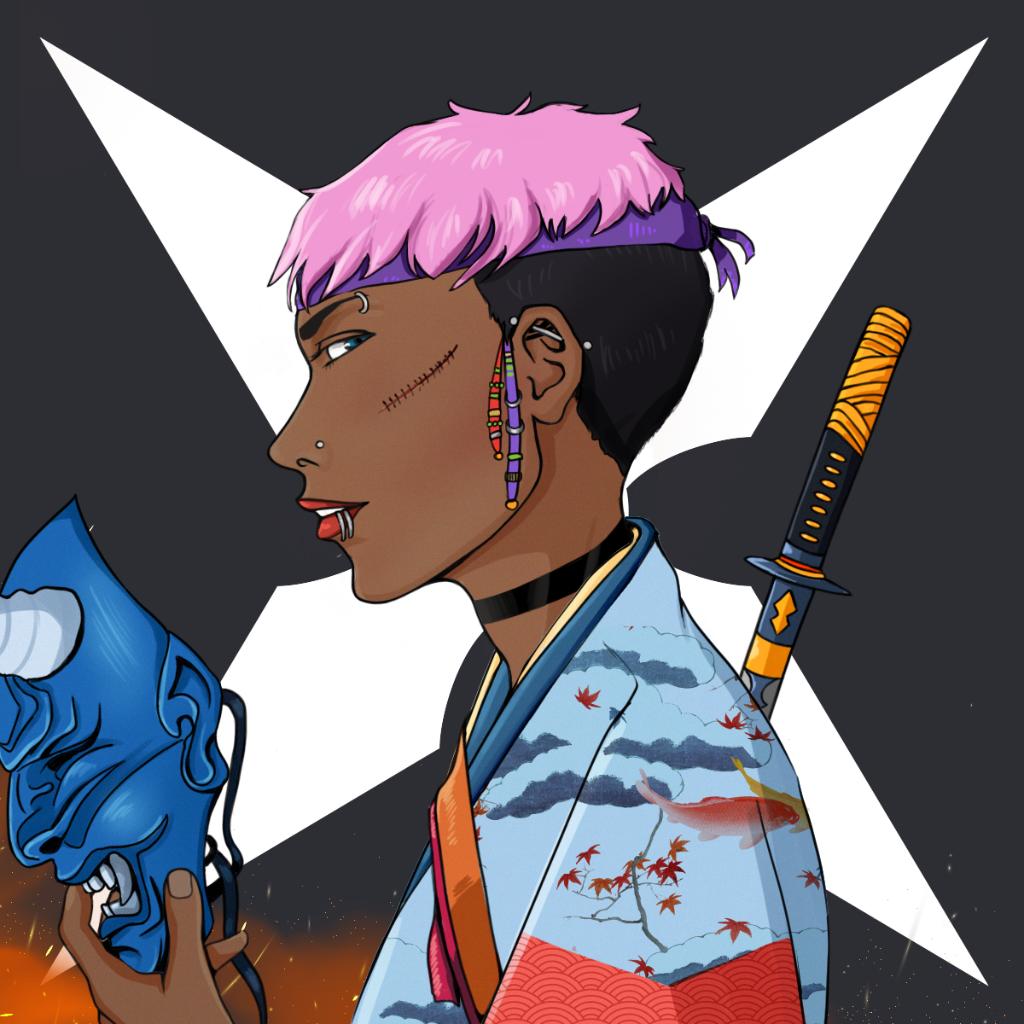 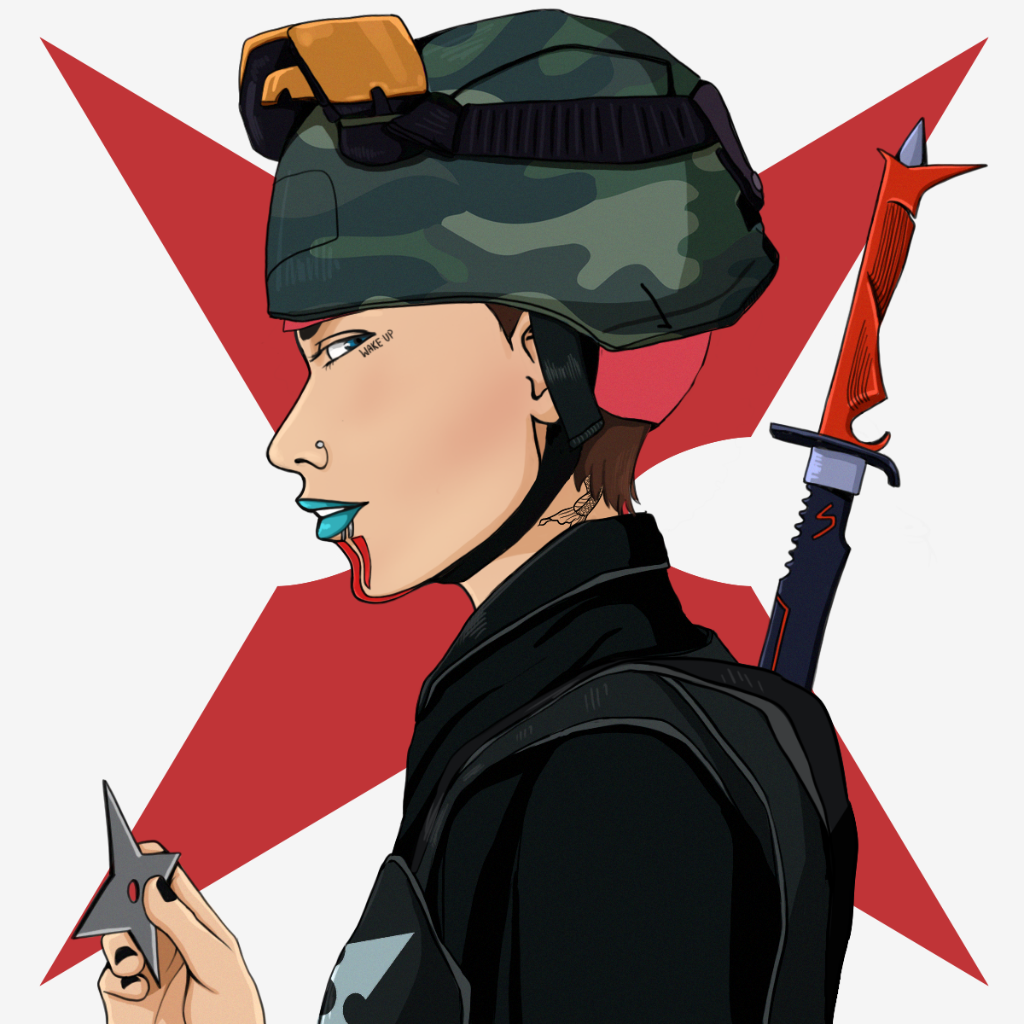 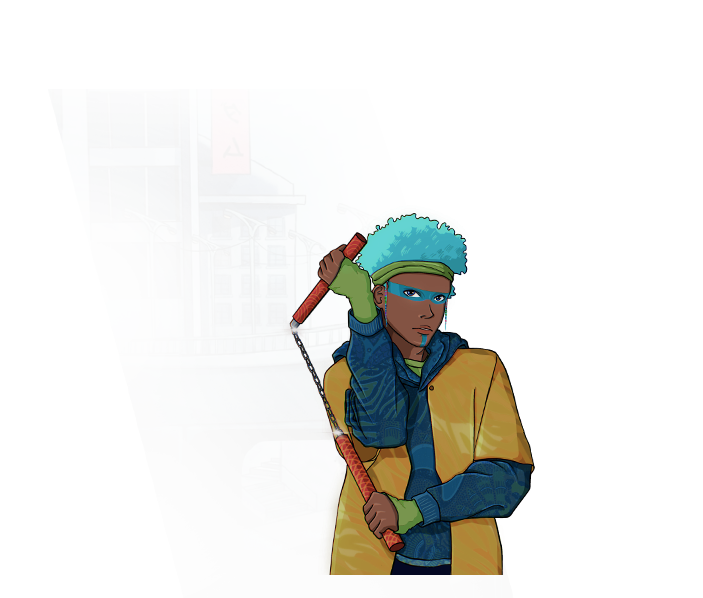 The stronger shuriken category you are in, the better in-game skills you will have to compete. We appreciate what the blockchain brings for the gaming industry in terms of decentralized space and asset management.

As the endless runner games are very familiar genre for everyone and perfectly suited for our concept, we wanna expand the storyline into the endless runner NFT game “Shuriken Run”, where rarity of character traits will make the difference.

All of our NFT holders will have lifetime free access to the game.
If you are interested in P2E ability, please check FAQ section.

Details about the masterplan may evolve over time

Development of the NFT game officially takes off.
Timeframe for the first beta launch of the game provided .
15 special edition NFTs will be airdropped to the random holders.
Massive giveaway event with prize money worth 20 Eth.

5 special edition NFTs will be airdropped to the random holders. 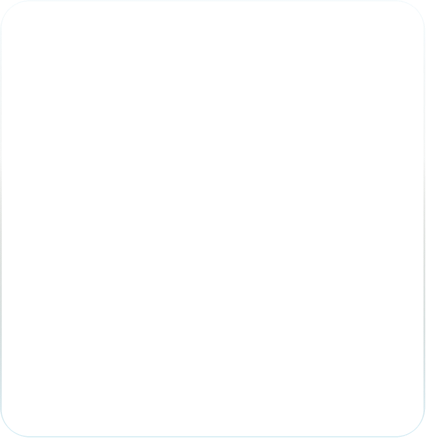 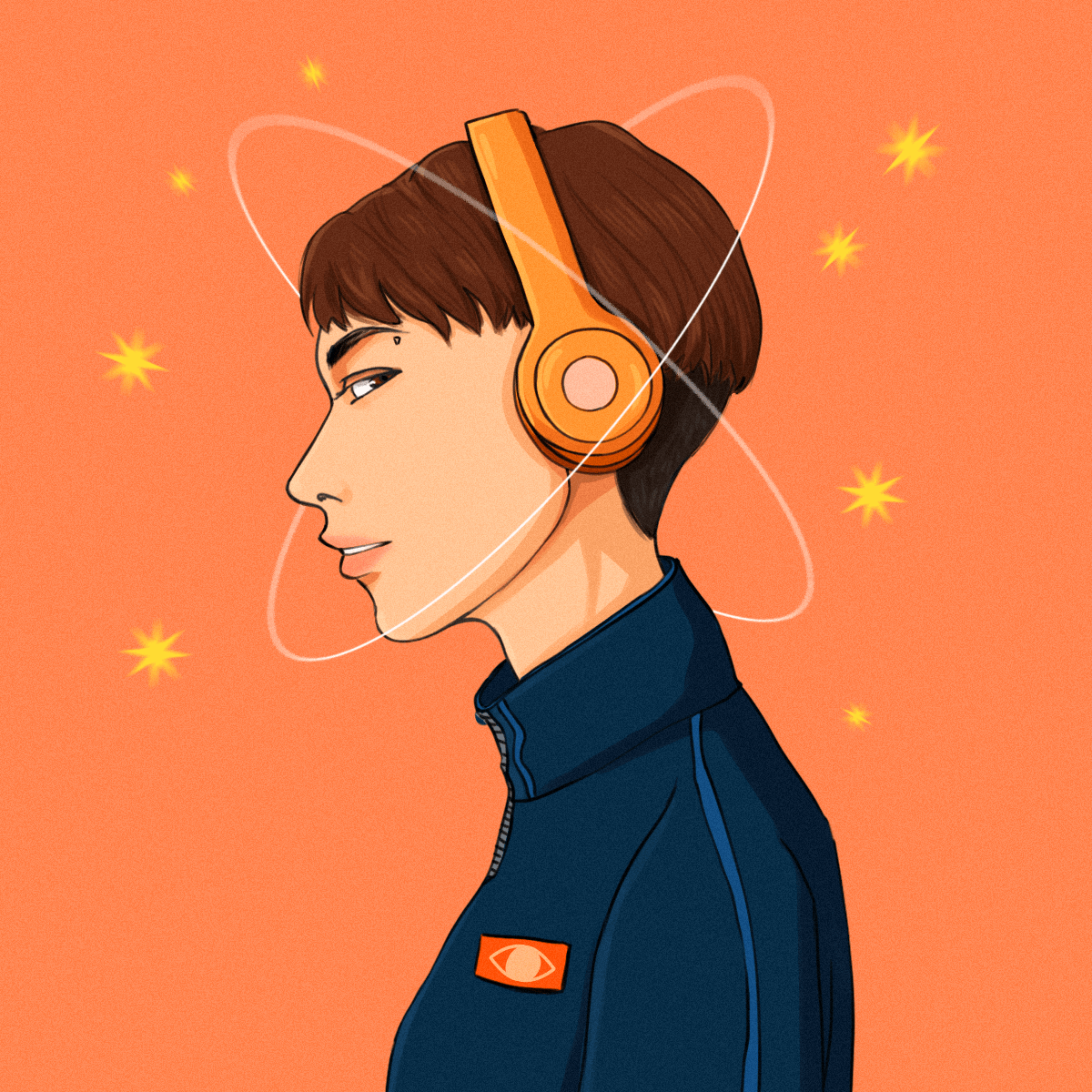 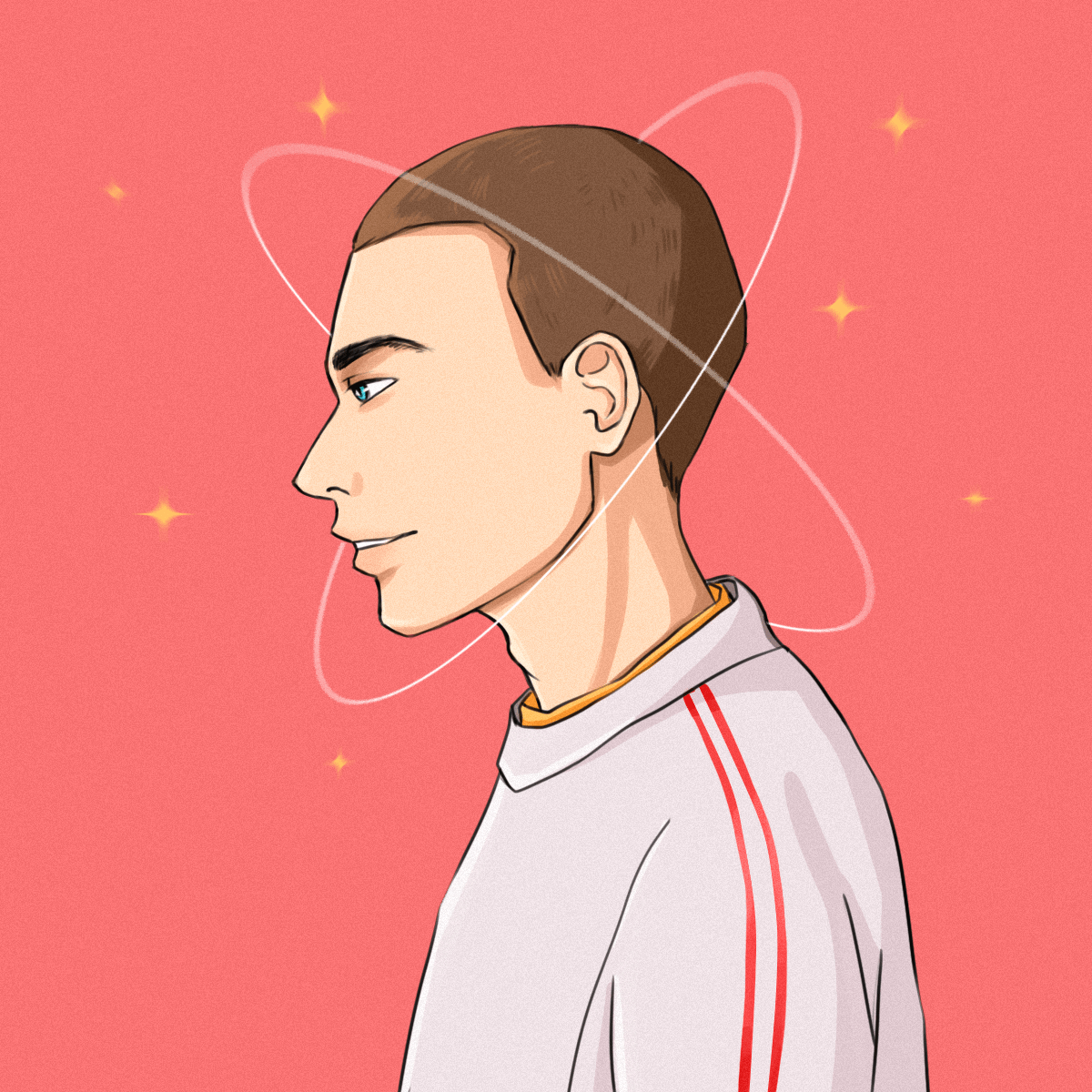 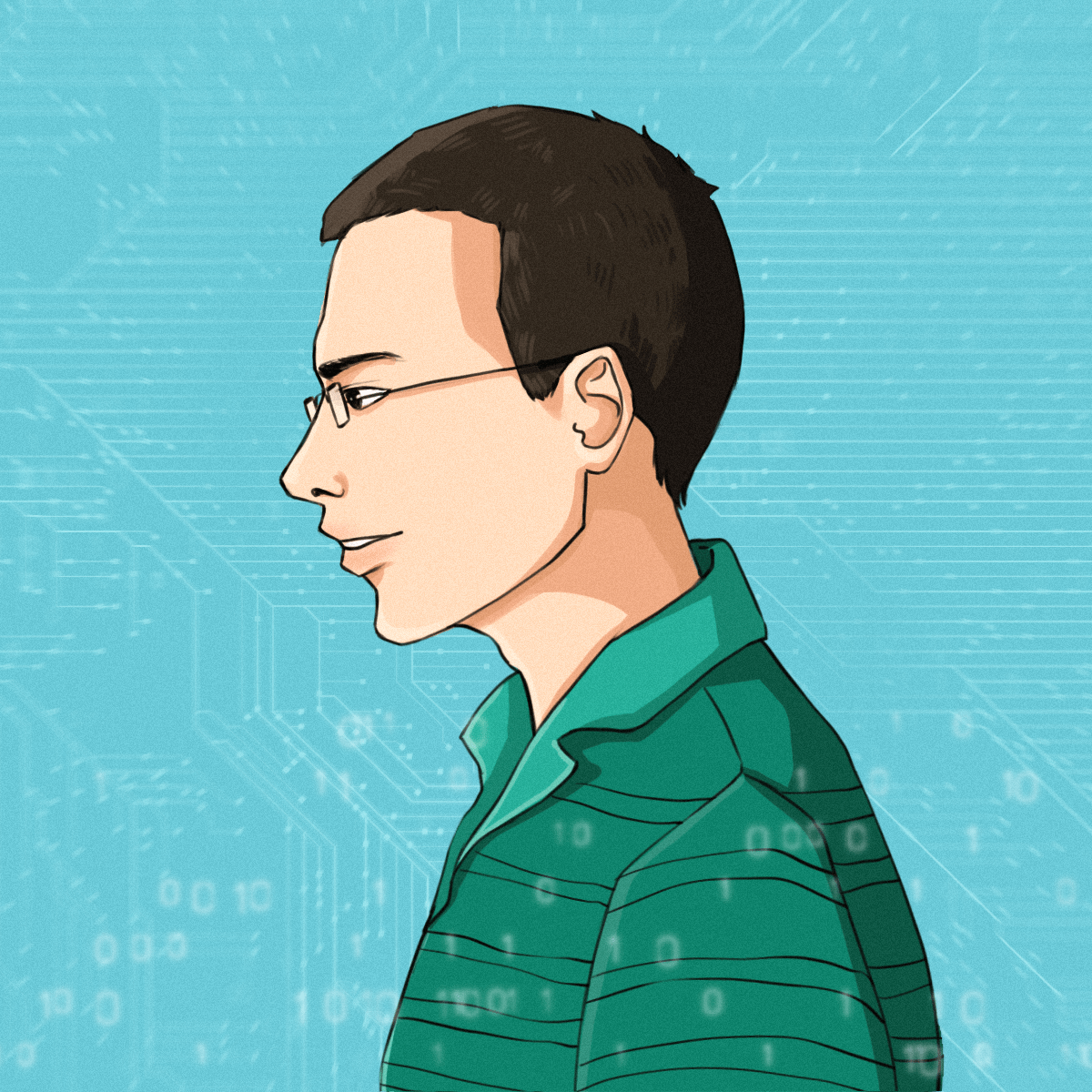 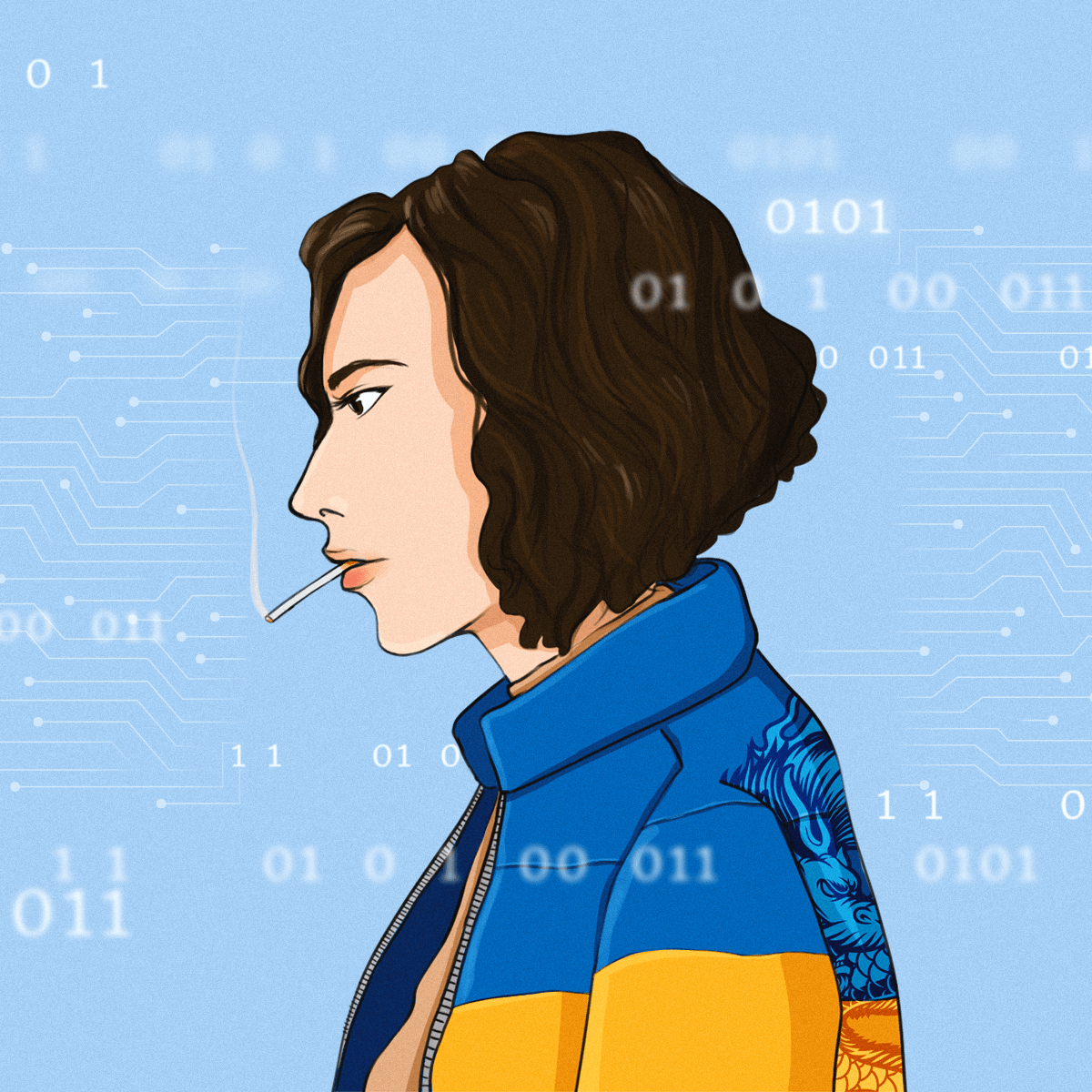 Artist. Fell in love with anime before it was cool. Deals with overthinking by visual storytelling. Knows every unknown artist on Spotify. Grumpy when hungry.
Writer. Not a morning person at all. Curious about creative storytelling. A master in the demanding art of patience. Talkative introvert.
Founder. Tech nerd with bad jokes. Handles the business with codes since who the fuck knows how many years ago. Cheats his wife with blockchain shit. Tired if not working.
Developer. Brutal when on a diet. Pretty much every time on a diet. The most goofball in programmers and the most programmer in goofballs. You’d better Lock the screen if she is around.

Exact Date To Be Announced
To Be Announced Soon.
We absolutely consider integrating play-to-earn ability into the game in the long run.
The thing is – good P2E games are not made overnight. Building proper tokenomics and that kind of stuff requires tons of careful development.
If anyone tells you otherwise, always double check. On the one hand, we don’t wanna make crazy promises for the short period of time that, in fact, requires years of proper development.
On the second hand, we don’t wanna sacrifice quality and give you the useless product in 2 months with broken tokenomics just to say “it’s p2e bla bla bla”.
We want to take one step at a time, give the community first version, listen to the feedbacks, upgrade accordingly and then decide about the next steps.
We want to make game simple enough for even non-gamers to be competitive and functional enough to be interesting.
This industry is still new and it changes fast, we prefer providing quality stuff over useless promises with no functional execution.
We are exploring the gas efficient ways for minting on daily basis. Almost certainly it will be ERC721A.
©2022 ShurikenTeam. All rights reserved.
1
LETTER FROM US

To the rebellious minds and warrior souls in modern society.

Nowadays, we live in an era where everything is open and connected.
You can touch the history with several clicks,
meet someone from the other side of the world with a tiny swipe,
hear every information about who’s who why what where when and how, without any effort.
This project is also up and running thanks to the modern world.

It brings opportunities.
We embrace that.
But it brings some other things as well.

There is a certain type of information overload that creates global tension.
Here comes a noise. Bully. That kind of crap. We know you know.
It leads the courage of self-expression to continually diminish.
Then everything tends to become routine.
Similar shit. Boring.

We believe we should be equal, but not identical.

That’s why, besides everything, we felt the necessity to put the universal human truth into this project.
And we wanna remind you some kind of things you already know:
Your personality is the most unique thing you can have.
Your self-expression is the most pleasing action you can do across the all universes.

You can see some sort of bold, courageous, chaotic, rebellious self-expression in our artworks.
There are thousands of different personalities with hundreds of attributes.
The line between cultures, present, and past is blurred.
They don’t belong to any era. They are completely free.

At first sight, you may think you bump into stylistically anime characters. Then you might come across personalities with shiny modern T-shirts and ancient attributes at the same time, female samurais with cigarettes, the hipsters with ninja weapons - all the polarizing shit that are not supposed to make any sense together. But here they are.

In life, there are times you feel that being just open-minded is not enough to get comfortable with your identity, rightfully so. You need a warrior soul to stay courageous. That’s why our characters, besides their wild diversity, also have the metaphorical thing in common. They are all armed and ready to fight for what already belongs to them.

There is some sort of polarizing chaos in the NFT collection name as well.
Being from completely different cultures and genres of dictionaries, these two words in the Naming are also not supposed to make any sense together.
But here they are:

Shuriken originally means “hidden hand blade” - some kind of extra weapon. It points to the mindset and also serves as a built-in identity of our NFT characters.

Chik is our modified version of the modern slang “chic”, which means cool and stylish, very much like our characters. It’s grammatically incorrect, but who gives a shit?! While developing the verbal and visual identity, this variation felt awesome. And here it is.

So here is a thing.
In a noisy modern world, you can be whoever you wanna be. And you should.
Run your own race with the rebellious mind and warrior soul. This is an endless run of life.
If you are the one, these pieces of art might be made for you.